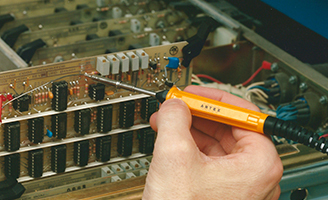 A soldering iron uses high temperatures, usually generated by electricity, to heat metal alloys to their melting point, allowing the operator to join two pieces of metal to each other. Typically made from tin, this joining metal is referred to as solder.  Soldering irons heat the solder, causing the alloy to melt, which then cools and joins two pieces of metal to each other.

When this solder cools and hardens, it acts in much the same way as glue. The result of soldering is a permanent bond between the pieces, called a soldered joint. One of the most common tools for creating this metal joint is a soldering iron, uses of which are many and varied, from arts and crafts to circuit board fabrication.

There are three basic types of soldering: soft soldering, hard soldering and brazing. However, the heat a regular soldering iron uses is only hot enough for soft soldering. This process uses lower temperatures, between 194-842°F (90-450°C). Typically, however, soldering irons are only used on solder that melts at 752°F (400°C) or under.

Soft soldering stresses the joined pieces least of any other soldering method, but it doesn’t make for strong joints, so isn’t practical for applications that require metal be load-bearing. To make stronger joints, it’s necessary to utilize something that heats the metal to a higher temperature, such as a soldering gun or torch.

There are numerous commercial, industrial and domestic soldering iron uses. These tools are additionally common for such trades as electricians, jewelers, metal workers and other craftspeople.

Some typical soldering iron uses include:

How to Use a Soldering Iron

As there are numerous soldering iron uses, operators utilize this tool differently depending on the application. For example, when soldering jewelry, though an open-flame torch will provide higher temperatures, this can also be done with a soldering iron, which enables more delicate operations. Additionally, there are various techniques that can be used and which are dependent on the type of jewelry being made.

Soldering iron uses for jewelry include:

Joining Wires with a Soldering Iron

A common task done by both electricians and DIYers with a soldering iron involves joining wires. It’s helpful to have a device, often referred to as a “third helping hand”, to hold cables while working. This third helping hand consists of crocodile clips to hold wires together, a weighted base and metal arms. Alternatively, a pair of pliers could be used instead.

The soldering of components onto a printed circuit board (PCB) is also commonly done with soldering irons.

Variations on soldering stain glass include using solid-core, rather than rosin-core or acid-core solder. Also, it’s best not to apply heat in any one place for too long, as this may cause the glass to crack or break.

M. M. Newman Corporation carries several types of soldering irons, including both standard and miniature models made by Antex. We also carry tips and other accessories for each model. Uses vary depending on their wattage and other characteristics.

M. M. Newman Corporation also carries a number of tips and other accessories for soldering irons. All tips slide easily over a soldering iron’s heating element.

Types of tips and accessories available:

Dial-Temp temperature controllers work with any soldering iron between 15-1600 watts, complementing work on heat-sensitive, electronic assemblies and components.  This will allow you to lower the heat on your soldering iron to as low as 150°F.